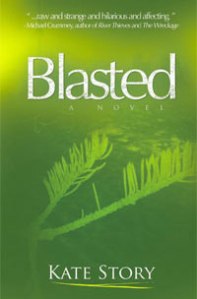 Blasted is the story of Ruby Jones: irreverent, exuberant, and troubled. Lurching between love affairs and cities, she is haunted by mysteries that surround her father and generations before. Steeped in Newfoundland folklore, Blasted mines a rich vein of experience, layering the mundane and the magical, evoking the forces that inhabit the land. The narrative shifts between generations and geographies, between contemporary life and stories as old as the Hill that looms over Ruby’s birthplace. Vivid
characters surround Ruby: her irascible grandfather, elegant Cree artist Blue, her whiskey-slugging Aunt Queenie, and others, sinister and unexplained. When Ruby unravels at last, she must face the demons that pursue her.

“Kate Story’s debut novel is an unlikely marriage of Newfoundland’s oldest traditional lore with the contemporary urban world of St. John’s and Toronto. The result is raw and strange and hilarious and affecting. Ruby Jones – itinerant waitress, sometime nude model, budding alcoholic – admits early on that tenderness and rage are her ‘heart language.’ Blasted offers both in spades.”
— Michael Crummey, author of River Thieves and The Wreckage

“I am as delighted as other readers will be with this young Newfoundland writer. With talent and
patience Kate Story has unearthed another of the many mysteries hidden within the Southside Hills.”
— Bernice Morgan, author of Random Passage and Cloud of Bone

“Altogether the narrative tide of Blasted lifts its themes and characters and carries them forward in an
irresistible flow. Throughout, Story writes with energy, vivacity, a lack of self-pity, a clear eye for
detail, and a great sense of comic timing. This is a wonderful novel.”
— The Newfoundland Quarterly, December 2008

Blasted has been longlisted for the 2009 ReLit Awards:  “The country’s pre-eminent literary prize recognizing independent presses.” – The Globe & Mail.  See therelitawards.blogspot.com/ for details.

Kate’s novel Blasted has received an Honourable Mention in the Adult Category of the 2009 Sunburst Awards. The Sunburst Award for Canadian Literature of the Fantastic is a juried award based on excellence of writing in two categories: adult and young adult. The awards are presented annually to Canadian writers with a speculative fiction novel or book-length collection of speculative fiction published any time during the previous calendar year.

Online Blasted is available for purchase at:
amazon.ca, chapters.indigo.ca, amazon.com and directly through the publisher at creativebookpublishing.ca

Blasted is also available as an eBook on both Kindle and Kobo. 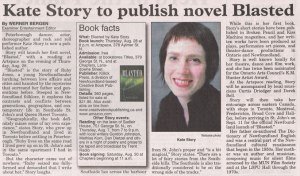 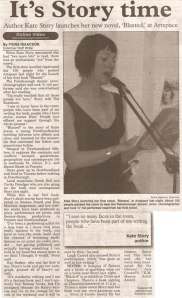 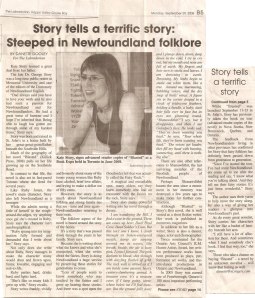 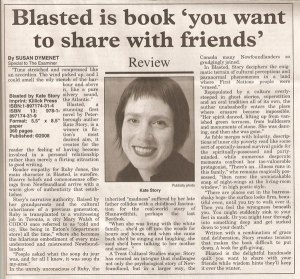 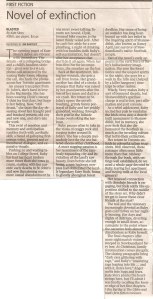 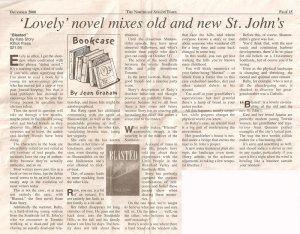 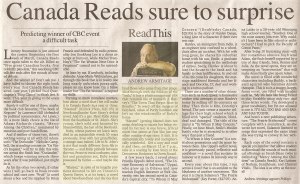 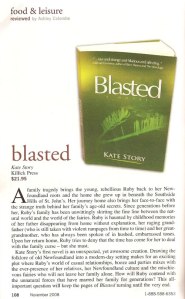 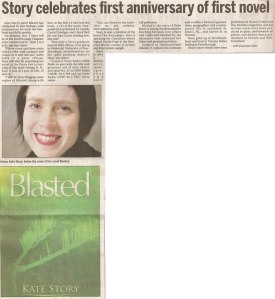 Click HERE for a review, plus radio interview, with Derek Newman-Stille – May 2014

From an interview with Andy Jones By Michael Posner Globe & Mail, October 8, 2008:
Posner: “What’s the last great book you’ve read?”  Jones: “I’ve been reading a lot of work by British novelist William Boyd. I really like his stuff. And I’ve just started to read Blasted, by Kate Story, who’s from St. John’s, and I’m really enjoying that.”

Listen to the radio program “Author’s Hour” with host Mike Minor. Broadcast on Oct. 27, 2009 on both MUN Radio CHMR 93.5FM, St. John’s NL and Trent Radio CFFF 92.7FM, Peterborough, ON.  The hour features an in-depth interview with Kate, clips from recordings of her Blasted Book Tour with musicians Curtis Driedger & Derek Bell, a song by host Mike Minor, and the poetry of Mic Mac poet Rita Joe. (File may take a few minutes to load – please be patient.)